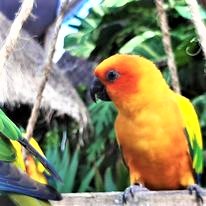 This article continues to explore the subject of Serenity and some of the scientific reasons for surrounding ourselves with the wonders of the natural world.

John Stuart Reid from the Shift Network provided a class on the subject of Sound Therapy. As this subject was close to my area of interest, I decided to pay for the course and learn from John’s knowledge. I’m glad I did because he is providing information that confirms what I have understood for some time now. Also, he presents it in a very scientific way.

One of the recommendations that I presented in my last article was to take the time and enrich your senses to the wonders of the natural world. These are the places and times when you will find rejuvenating energy for your body, mind, and soul.

As I listened to one of John’s modules, he explained that when we sit and listen to a waterfall, creek, or river, we expose ourselves to ultrasound frequencies that are not audible but are present as documented by instrumentation. A walk by the ocean will produce the same effect. He had a meter that recorded the presence of ultrasound frequencies and played a recording of a waterfall, and it lit up. Amazing! At the same time, it did not light up when a voice spoke into it.

John also observed that there are many sources of these ultrasounds in the natural world instead of the artificial environment that most people live within. The sounds of the wind in the trees, the birds chirping, and many other sounds one encounters on a walk in the woods produce these frequencies that are so beneficial.

What is even more amazing about this phenomenon is the biological function that occurs within our nasal passage.  When exposed to these ultrasound frequencies, special cells stimulate the production of nitric oxide which is responsible for reducing our blood pressure and slowing our heart rate. Other producers of these ultrasounds are full sound spectrum musical instruments such as the harp! This explains why so many people are positively affected by the music I present on CDs, on YouTube, and at live concerts.

He has also developed a Cyma Scope that can display beautiful geometric patterns of different sounds that are sampled or spoken into a microphone.

One of the pieces of information that started me on my whole journey with understanding the healing qualities of the harp and its music was when a friend shared the concept of cymatics. He had shown me an article on geometric designs produced on a metal plate sprinkled with sand that had sound conducted to the plate. Different sounds result in different patterns. As I considered this, it suggested there were material properties to sound.

This inspired me to investigate if the physical letters of the Psalms of David might have clues to connections with musical notes or sound frequencies. I wondered if I could decipher those notes into musical compositions. This understanding has led me to produce the Calming Harp music that I present today at:

John’s research takes this concept well beyond my original understanding. Through the images produced by the Cyma Scope, he demonstrates how structured sound is, and how beautiful it is to be able to “see” sound. For example, he experimented with a dolphin research group in Florida, which demonstrated that the sonar signals a dolphin sends out can be used by the dolphin to produce an image of what the sonar signals are bouncing off. This ability enables it to “see” with sound, even in murky water.

Experiments are underway to find out if the sound from a heart beating could be used to help diagnose any pathologies that might exist. Another area of possibility is the ability to hear cells and determine if they are cancerous or healthy. John even showed a Cyma Gram of a healthy body cell compared to a cancerous cell. This ability leads to the possibility of a surgeon being able to use the Cyma Scope to be able to tell if they were able to excise all of a tumor during an operation.

The medical world is embracing music and sound therapy more and more as studies reveal the abilities of sound and music to address disease. As we come to understand more about the properties of sound that can be applied, additional applications will be developed.

My hat’s off to John and the work that he has been doing over the past few decades. Fascinating discoveries have been made about the benefits of sound frequencies for health, and no doubt there are more to come.

The Value of Music in Life Applications

This is a compilation of articles from around the internet that discuss the effects of Music in various areas of life. This is a collaborative effort of lovers of music in general and harp music in particular. See an article that you think is appropriate for the improvement in the quality of life of others? Let us know so that we can add it to our collection! Check out the full collection

Support our ministry by donating $5 today!

Check out some of the other sites that we highly recommend for your reading and listening pleasure.

Simply enter your name and email! As a way of saying “Thanks!”, we want to send you a gift. You will be taken to our marketplace to “order” the eBook, but don’t worry, it’s still FREE.